During a week where the snow took over our lives and the birds ate more food than I did, here’s a short piece on the birds in the garden at Bubble HQ. 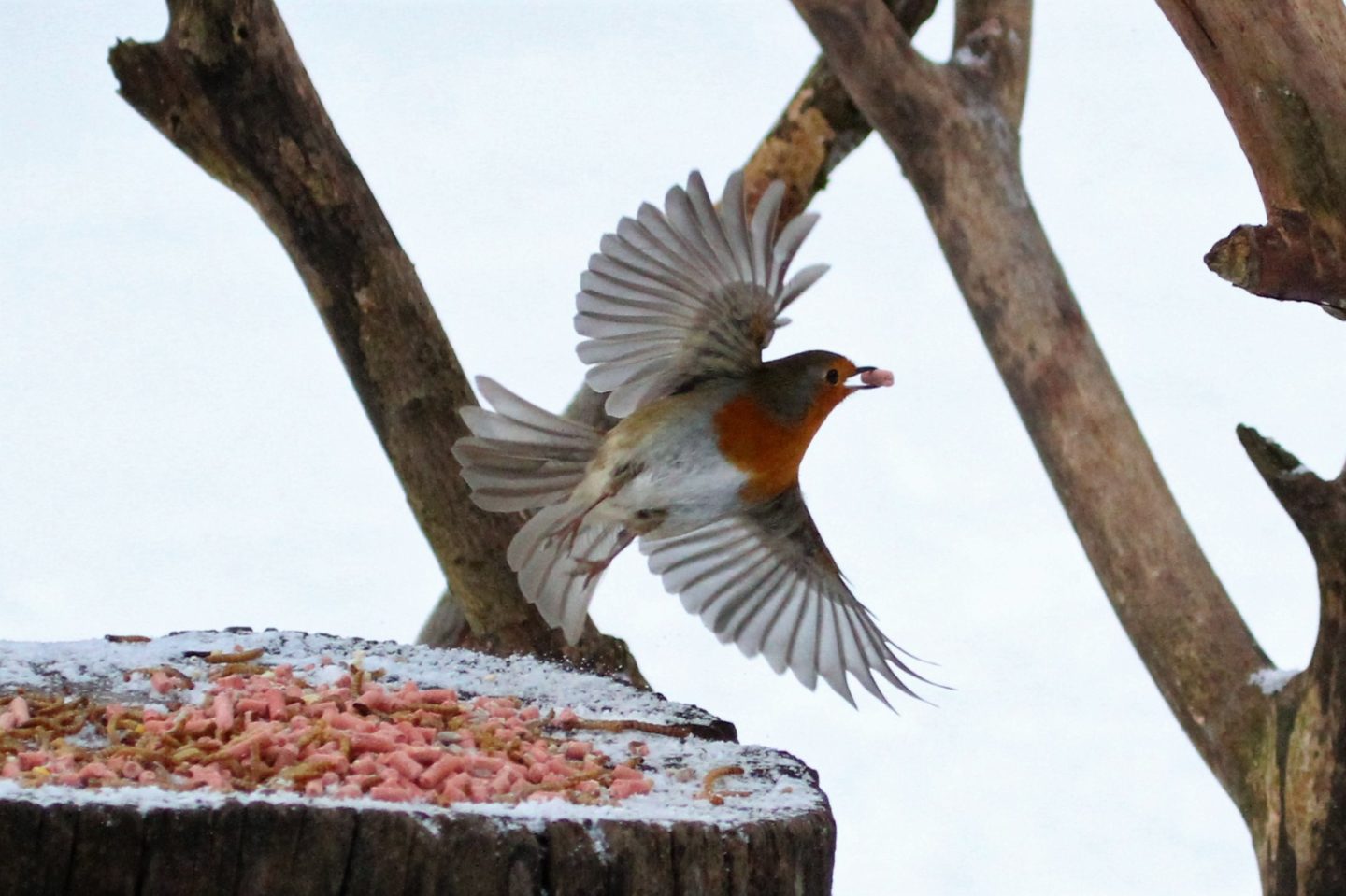 Robin feeding from the tree stump

Fat, floating snowflakes silently formed a shin-deep blanket across the garden four days ago. It’s a fluffy snow. It’s the kind that lies like sifted icing sugar, balling up occasionally, whisping in waves with every wind blow. Soft, delicate….not the best snow for holding a carrot nose firmly in place. My welly-booted foot sinks into it with a barely audible, low creak: the resulting print remains deep and straight walled.

Our morning dog walks are different. I can see exactly what she smells: the broad and clawed pad of a badger, the prison-uniform arrows of a pheasant, deep deer clefts disappearing into the darkness of the woods then reappearing then disappearing again. I create images of what went before me: a virtual reality of the mind. It’s not until we return, all weather-red and tingly, that I can see ‘in-the-here-and-now’. Birds. They’re everywhere. A bird feeding ritual has formed since the snow fell: breakfast, mid-morning snack, lunch, afternoon tea, tea, supper. I fill the feeders. Breakfast begins.

On the ground, in the trees, in the air, blackbirds gabble like a gang of about twenty over-excited teenagers. I try not to step on them as I fill the seed feeder swinging off a slim, twiggy rowan tree branch. I can feel cold wafts of compacted air hitting my face as blackbird wings rush by me as I serve suet, raisins and dried meal worms on the tree stump. They immediately squabble.

“Stop. Stop fighting. Now form an orderly queue and you’ll all get some. And, you….yes, you….don’t do that!”

I suppress my inner school-marm and retreat into the warmth of the house to watch them.

It’s not long before a ground hogger grabs my attention. This grey-crowned newcomer is bigger than the blackbirds who largely ignore him. Nevertheless he has stage presence. Dark elongated spots, like stoneage arrow-heads, run over and down his puffed out chest . A fieldfare. I see them regularly in the fields surrounding the forest but always in flocks never alone. But this fieldfare is bucking the trend, striding out on his own. 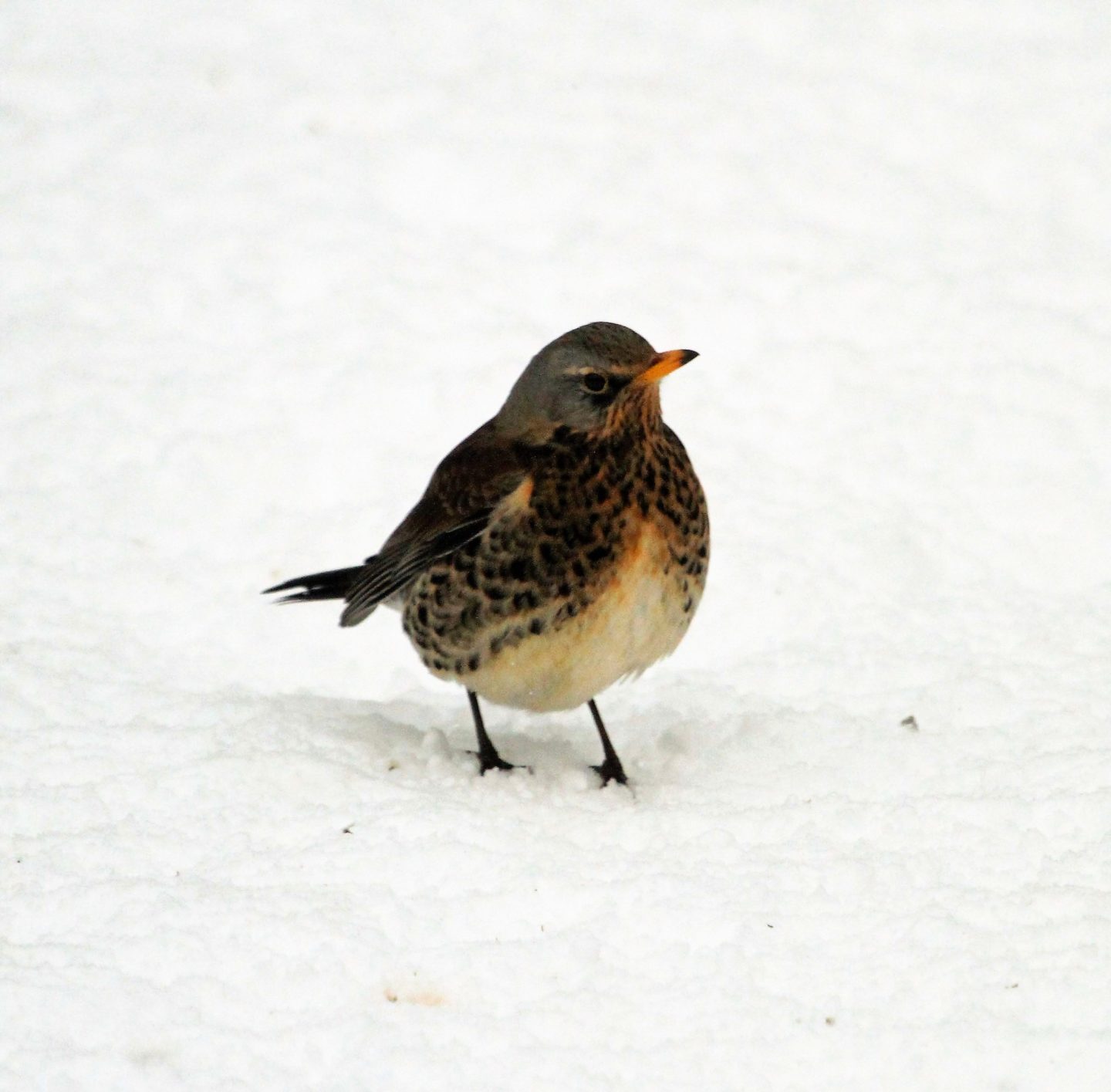 I can’t help be thankful that it’s the 21st century. Two hundred years ago, he would have been shot and eaten. With large flocks migrating every year from the northern continent, I’m inclined to think that the rhyme could have been ‘Four and twenty fieldfares baked in a pie’! I find an apple. Hopefully, a fieldfare’s love of apples will keep him here or, better still, bring in more. I’m wrong. He stays and mingles a bit then leaves and isn’t seen again. Meanwhile, the blizzards have brought large fieldfare flocks to many gardens across the country…..just not mine, it seems. 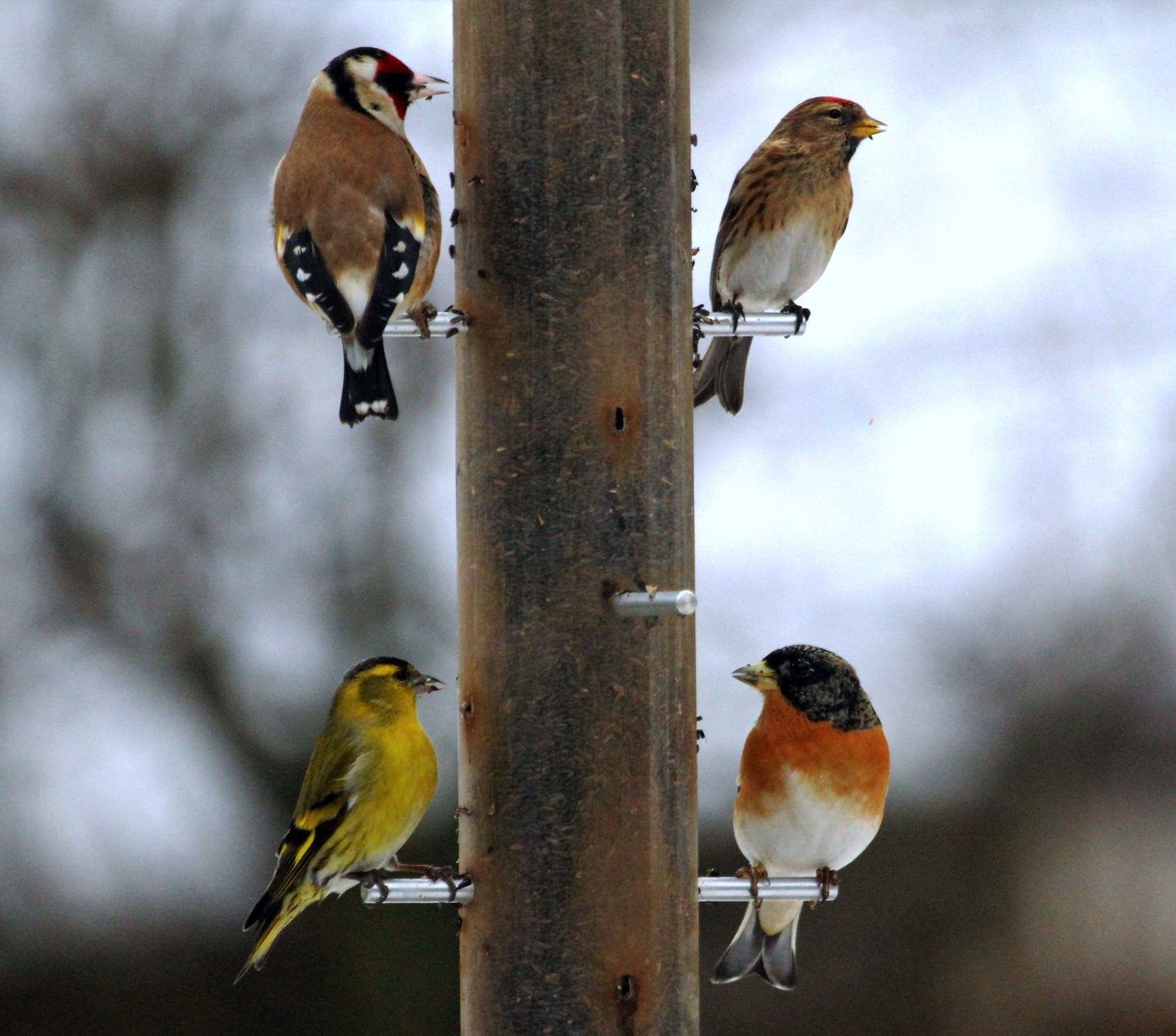 Colours streak across the garden canvas. A blurry Monet in the making. A nuthatch stretches his head to the sky, arching his back as he grabs a suet bit and flies off. There is familiarity amongst the blue tits, great tits and chaffinches who play host to passing bramblings. Two females, white streaked and a dull browny rust colour compared to the shock overt orange and dark peppered head of the male, merge seemlessly amongst the hawthorn’s bare branches. My eyes have to work extra hard to see them. Marsh tits and coal tits queue with robins to enter the cavernous jar of peanut butter I’ve hung in the same branches. Even the greater spotted woodpecker has a go although he doesn’t queue, he just barges through scattering birds in his path. He can get half his body inside now that the peanutty treasure is nearly all pilfered. He stopped drumming when the snow arrived. 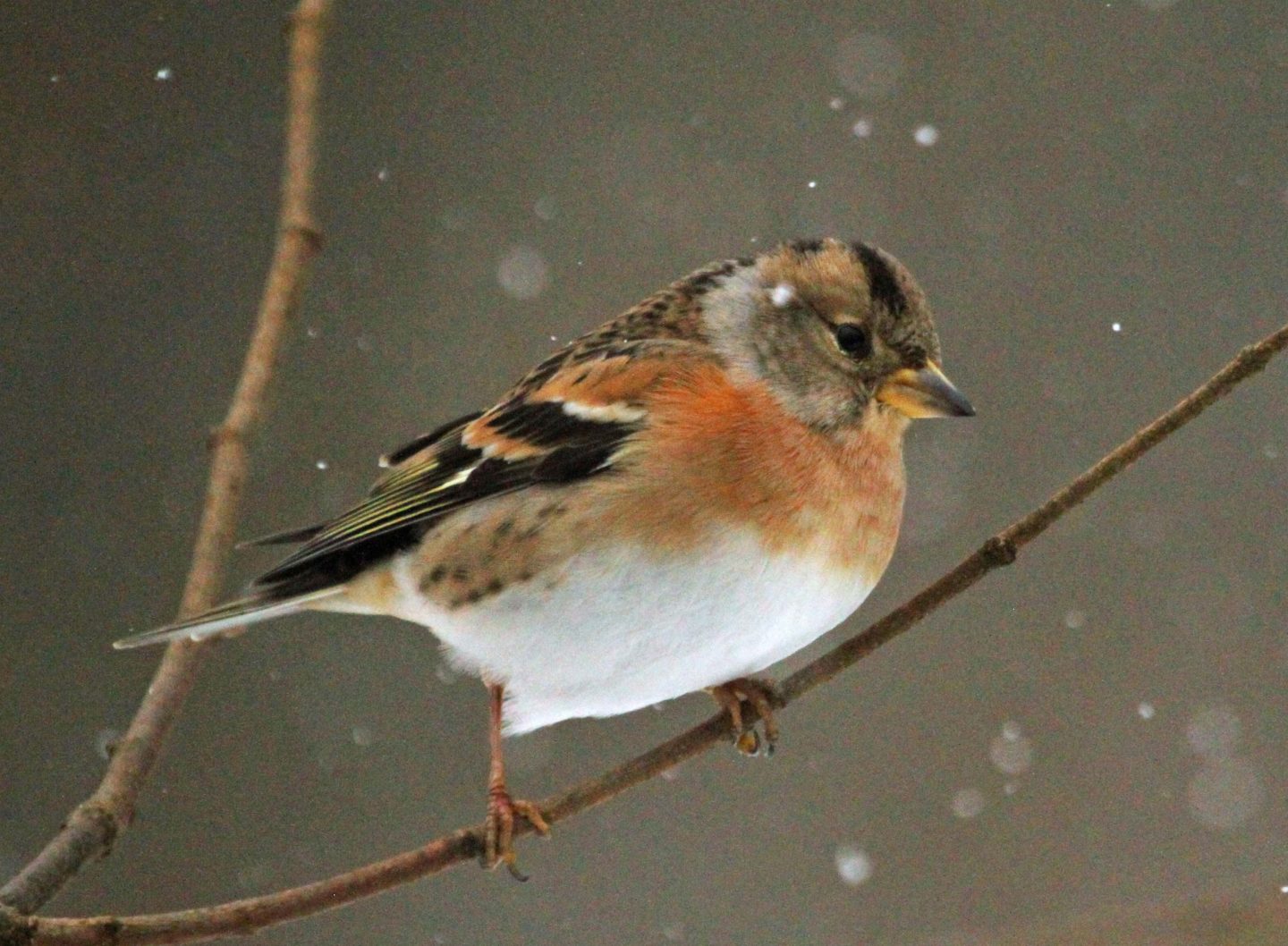 Brambling in the snow

There aren’t as many siskins as usual but I can hear their high pitched chitter chatter high in the trees further into the forest. Every so often they rise from a tree like a swarm of bees, swirling around the tree tops and dropping effortlessly back into a different tree. The ones in the garden that have broken away from the swarm are joined by lesser redpolls. Seemingly dull from a distance the redpoll’s head swatch of reddy pink accompanies a rosy tinge to the chest. Similarly, the rosy tinges to the black and white ping-pong balled bodies of the long-tailed tits are more prominent than usual. They follow each other back and forth from the holder containing berry suet bits by the tree stump to the suet balls hanging off the almost-tumbled-down shed. One, two, three, four, three, five, two, one, none, three, four, six, two…..I can’t count quickly enough. 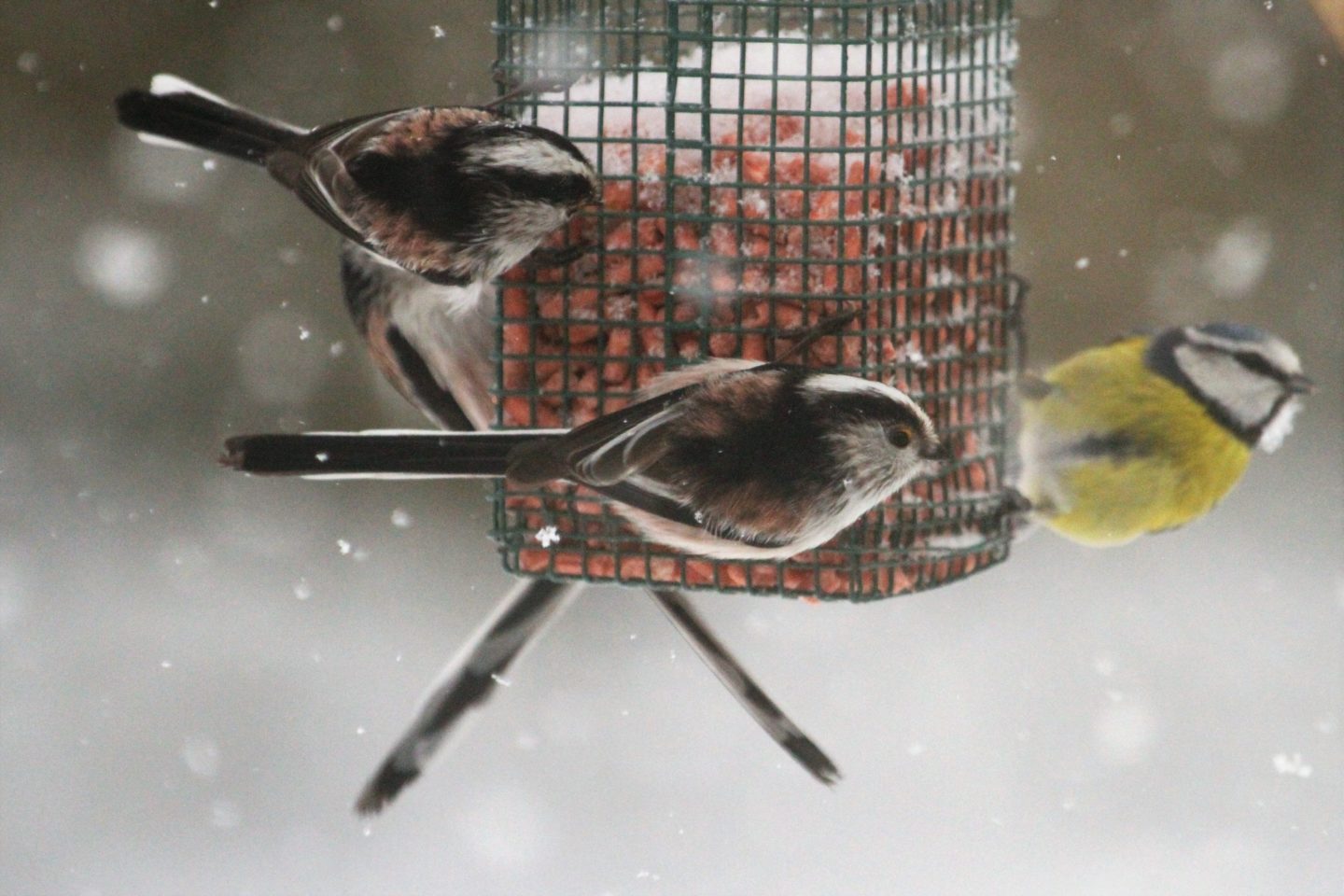 Long-tailed tits and a blue tit

Suddenly a burst of squawking and a mass exodus interrupts the feeding frenzy. A sparrowhawk attacks the tree stump. She misses. She moves on, gliding out into the forest. After a short pause, feeding resumes.

Something speckly catches my eye. A starling, no, two starlings. What are they doing here? They have never been to the garden. Yes, I know that they’re common but here they’re a rarity. This is as exciting to me as seeing a starling murmuration. I hope they come back now that they’ve found me. Mmm, let me rethink that. The birds are eating me out of house and home. A flock of starlings may not be what the garden and its birds need right now. My finances certainly don’t! They eventually move on. 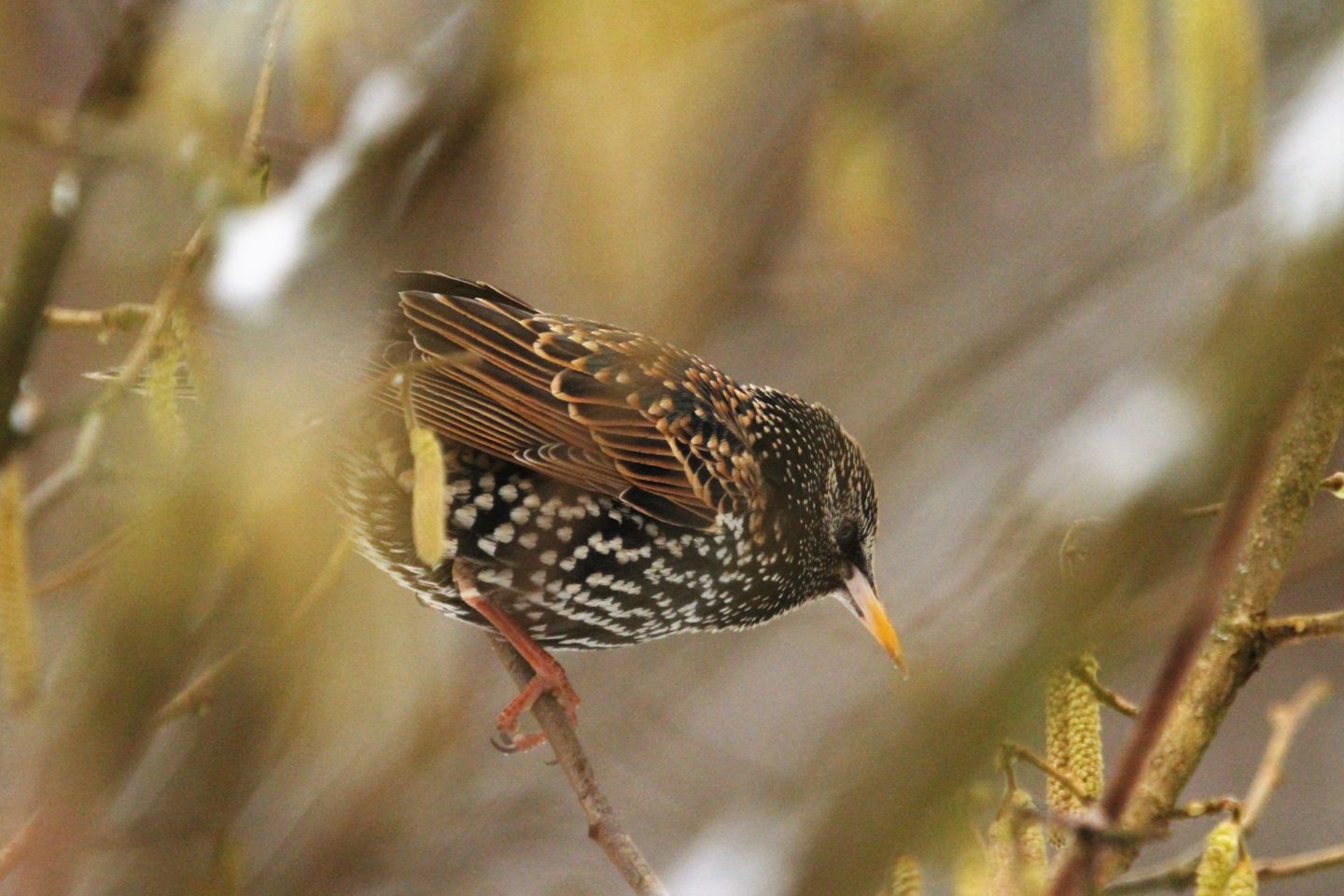 Starling amongst the catkins

I take my camera outside but the cold beats me. The warmth of the house calls. The more skittish birds, absent whilst I’ve been outside, return but flit away at my slightest movement. The resident crow pair, several wood pigeons that roost in the copper beech, the stock doves, dunnocks. I creep as slowly and as silently as I can to the window but still they see me.

I move away but robins and blackbirds are now at the window staring in at me menacingly as they know their next feed is due. I reluctantly leave the warmth of the house….and we start the process all over again.