I’ve neglected the RSPB reserve at Bempton Cliffs on the Yorkshire east coast for far too long so remedied that with a quick visit the other day. I’d seen on various social media groups that Short-eared Owls were showing well at the moment so I decided that they would be my target bird that day.

So, what did I see? The Puffins, of course! The day was sunny but windy. Even so, it was quite busy and the Puffins appeared to be on everyone’s wish list. In fact, the first bird I saw on the cliffs as I peered over the fencing was a lonely Puffin staring longingly out to sea. He did look a bit forlorn as if he’d lost his mates however there were others. There was the odd one dotted about on the cliffs mingling with the Guillemots and there were a few out at sea. Nice to see them back after the winter.

The path along to the spotting areas at New Roll-up and Staple Newk, was muddy but not overly so. However, today, for some unknown reason, I found that I was slipping and sliding, struggling to stay on my feet. Nobody else was finding it difficult, just me! I did, however, think that the Jackdaws, Pied Wagtails and Meadow Pipits, that dropped down onto the path and onto fence posts, were having a laugh at my expense! In fact, the Jackdaws do seem to be the jokers of the pack. They appear full of character with a mischievous twinkle in their bright pale-coloured eyes. Meanwhile, up above over the fields, a Skylark sang his little heart out. It can’t have been easy, high up in that wind. There’s just something about the skylark song…… 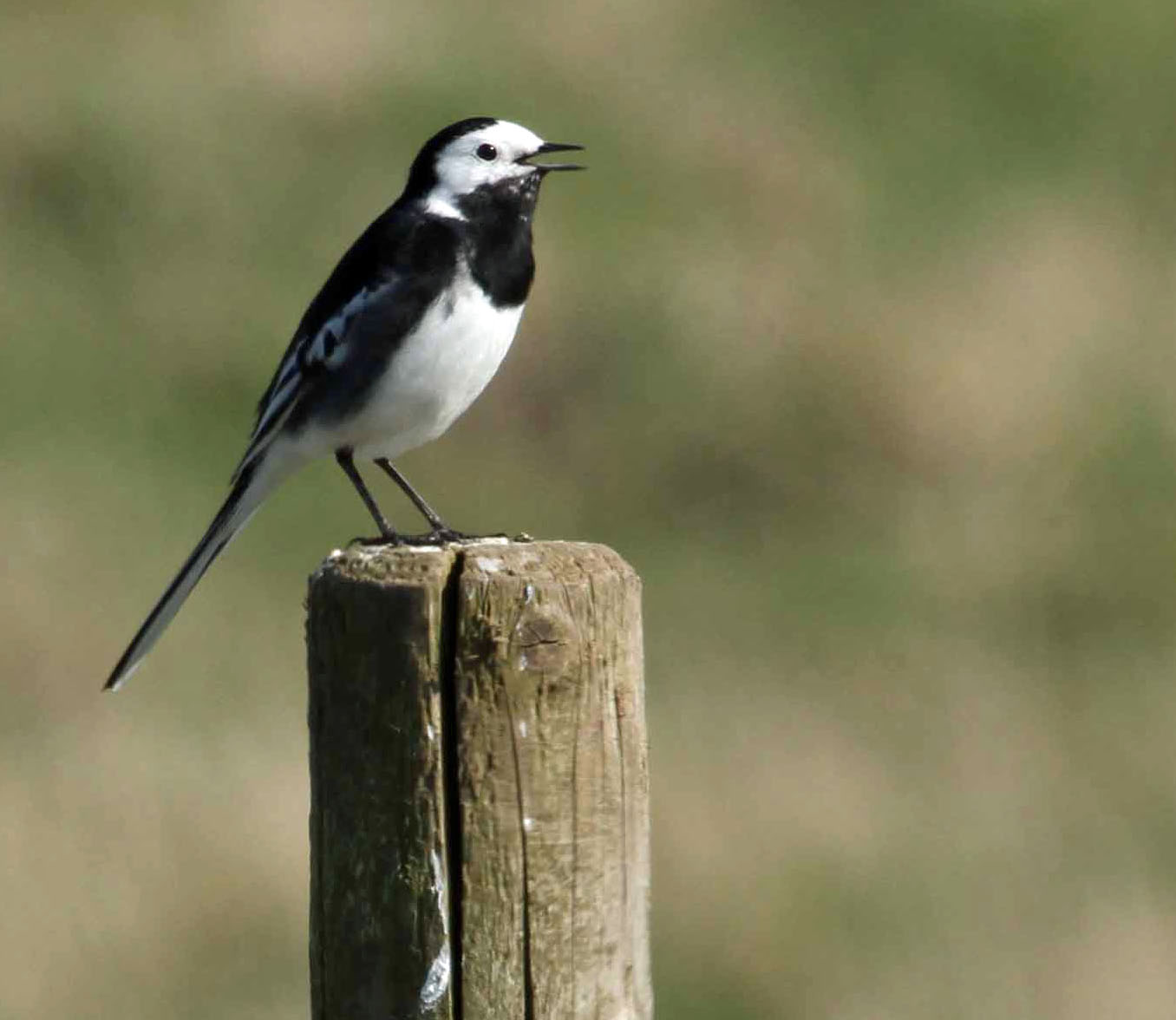 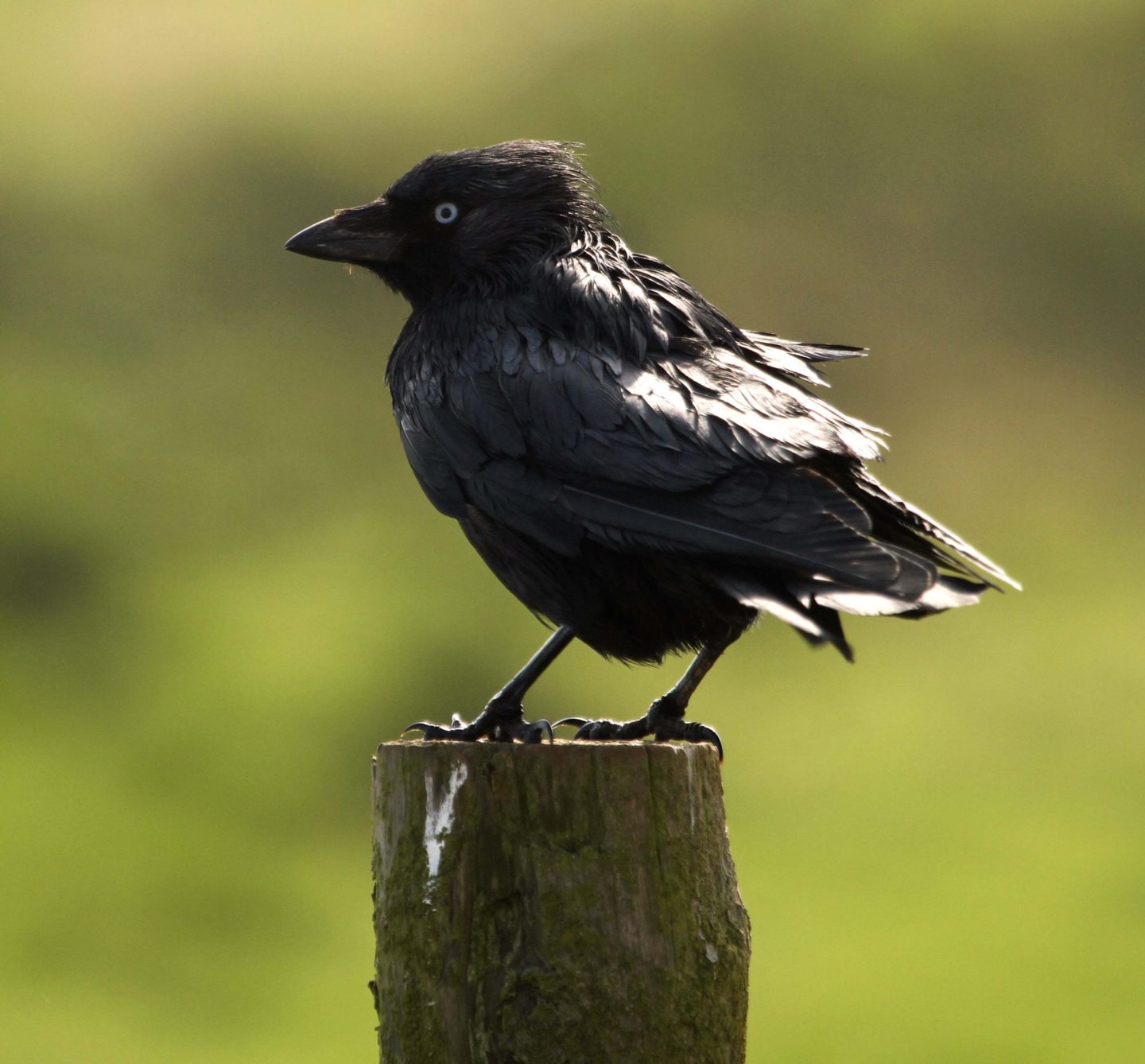 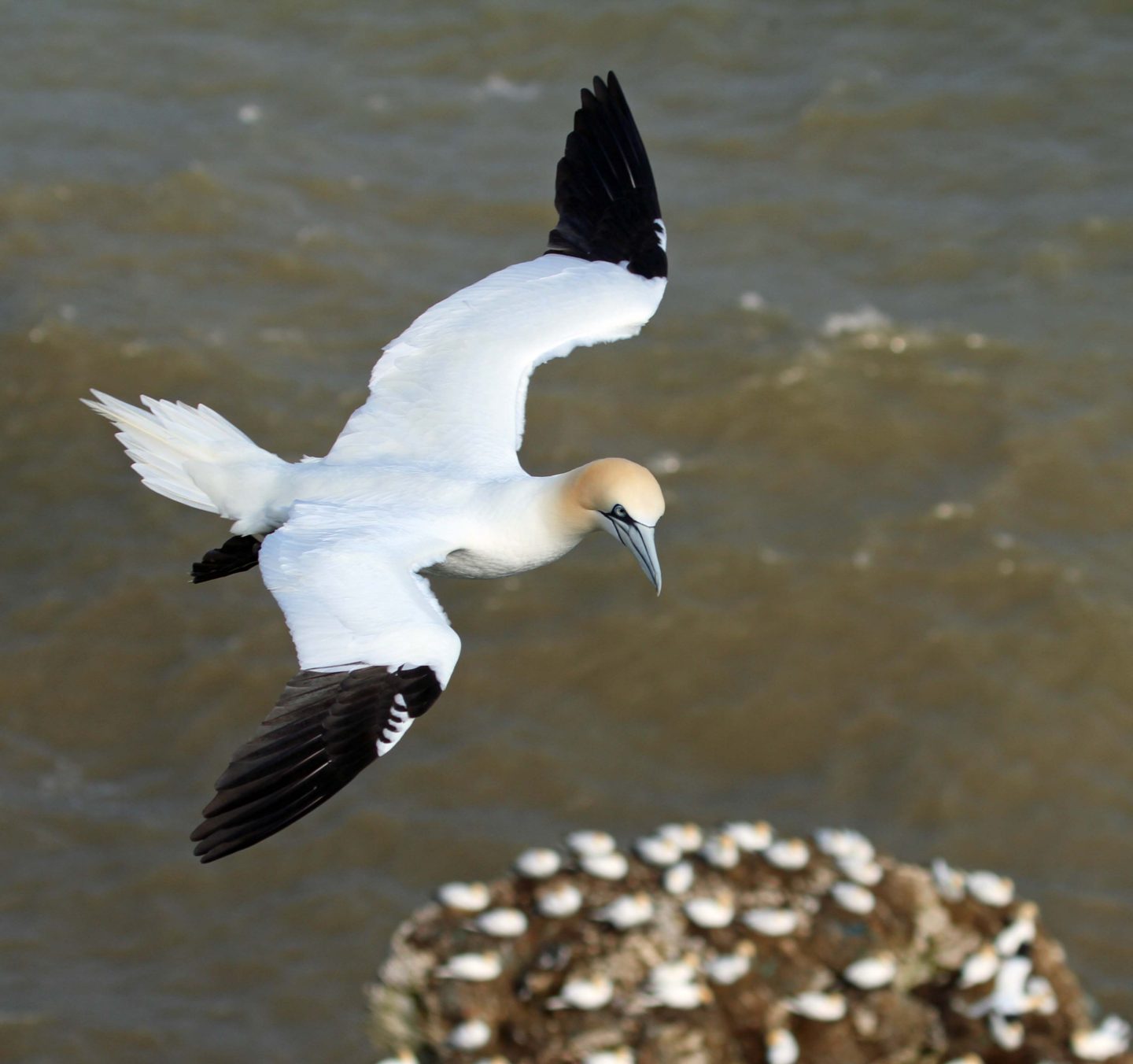 Anyway, the Gannets put on their usual spectacular show. They patrolled up and down the cliffs, as usual, like they owned the place, giving the odd sideways glance then stalling, gliding and riding the wind every so often. Did I mention that it was windy? It wasn’t just windy, it was very, very windy! Standing upright whilst keeping binoculars and camera steady was nigh on impossible meanwhile the Gannets went about their business without batting an eyelid, collecting nesting material, flying out to sea and cosying up to their partners. 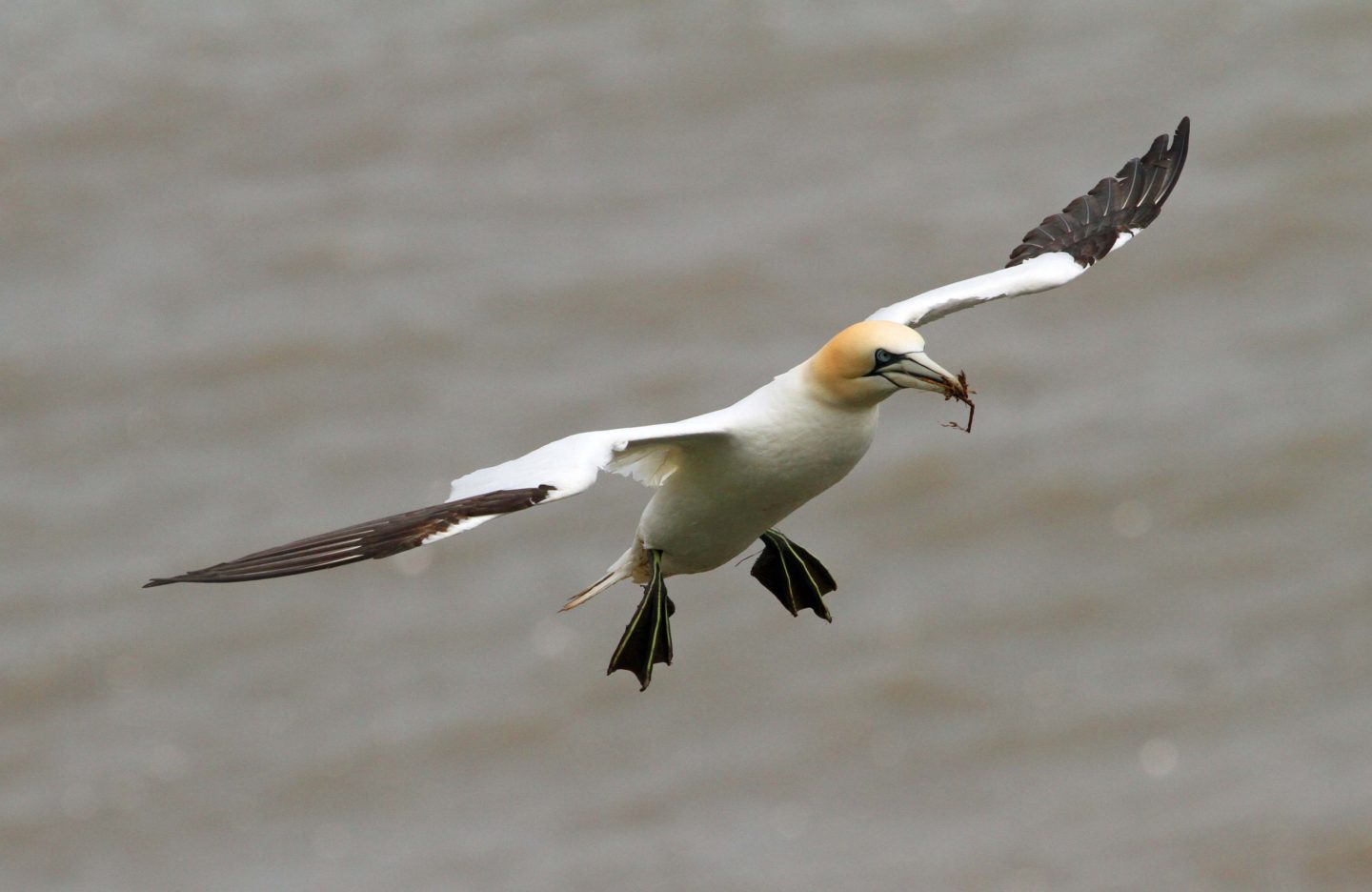 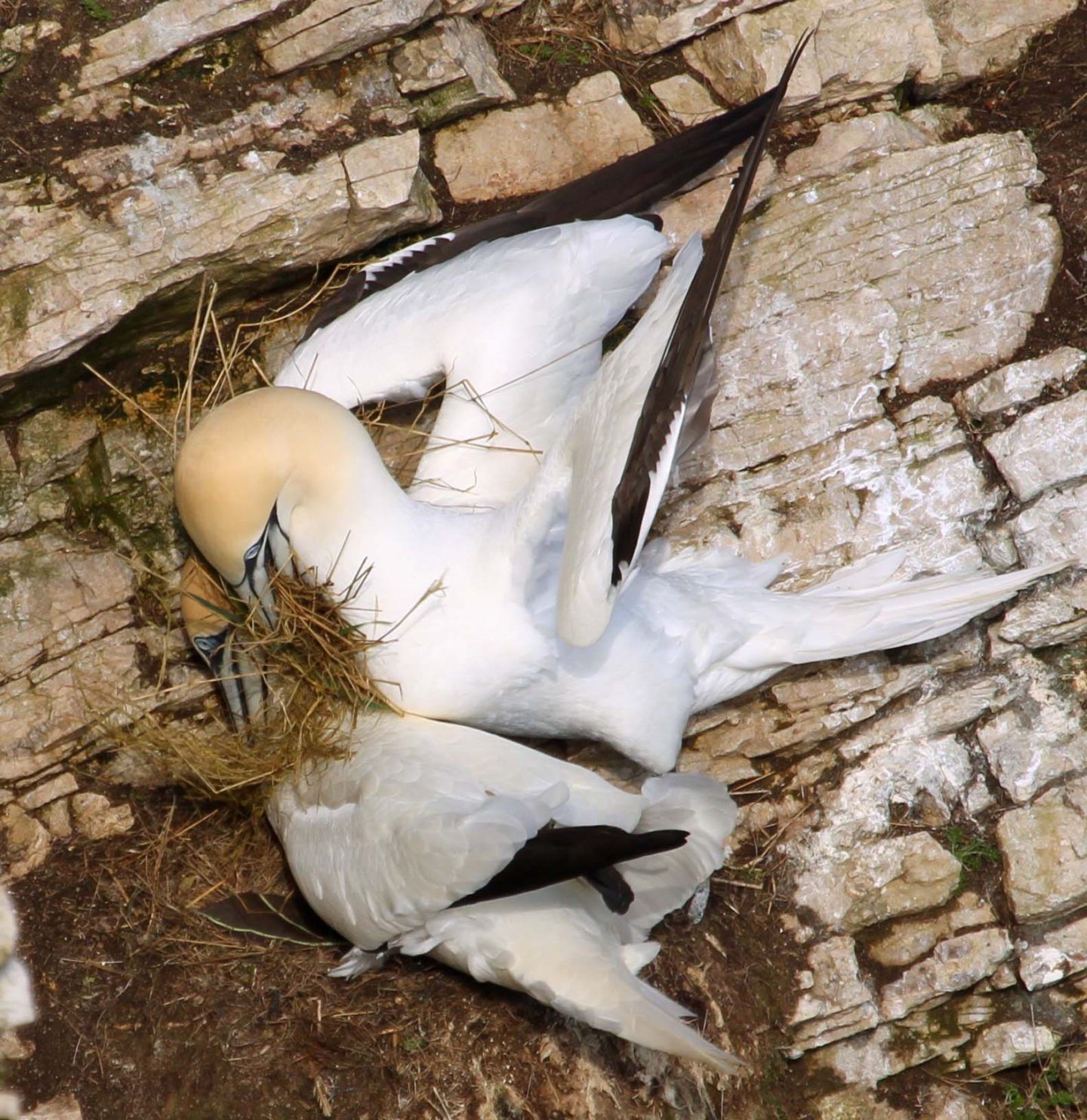 ‘I’ve brought you this grass back….here, take it!’

The Fulmars, always a favourite, looked to revel in the wind, flying incredibly fast. Sky diving and gliding, skirting the cliffs and back out to sea, they never seemed to land. Windy days obviously suit them. 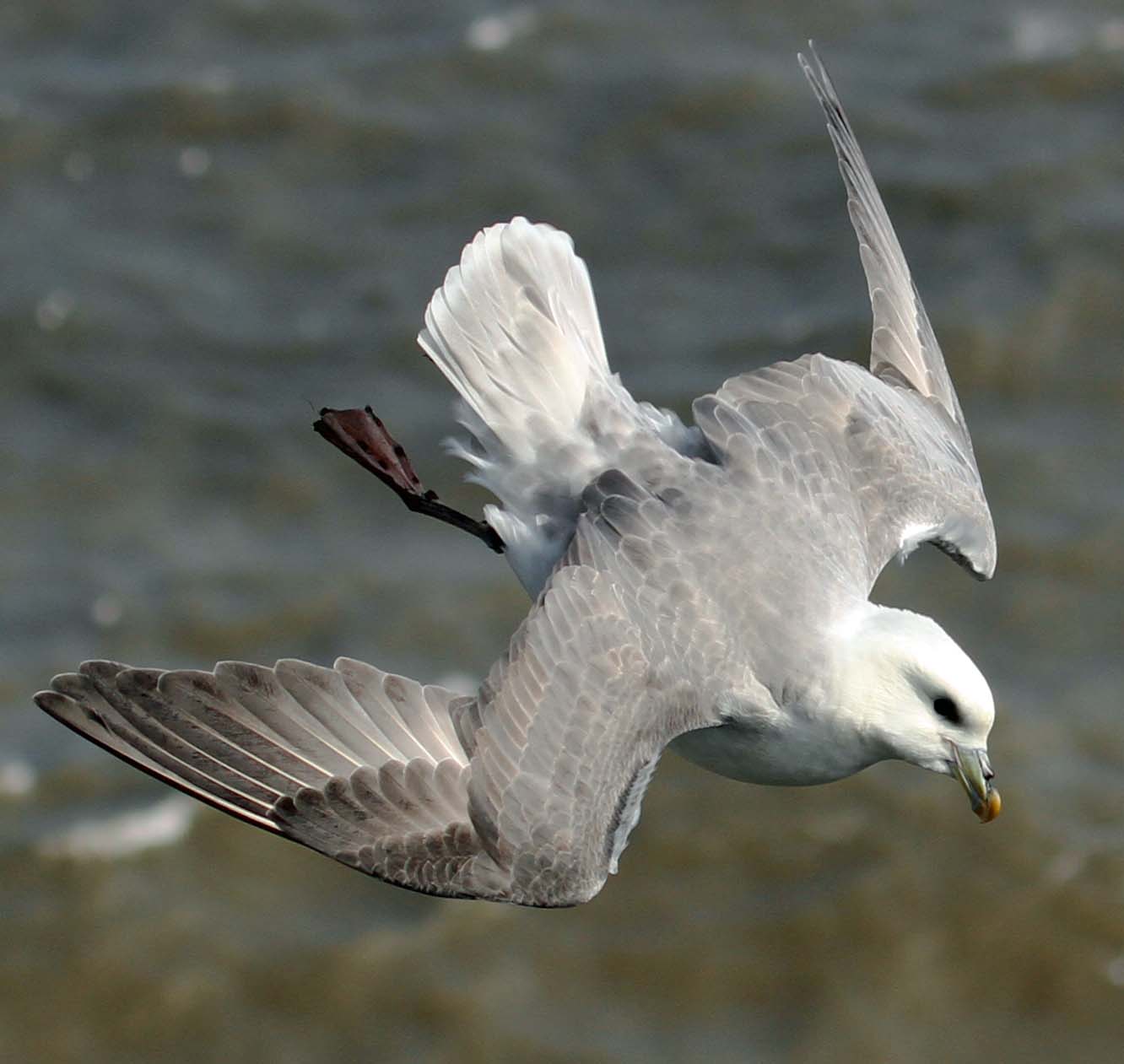 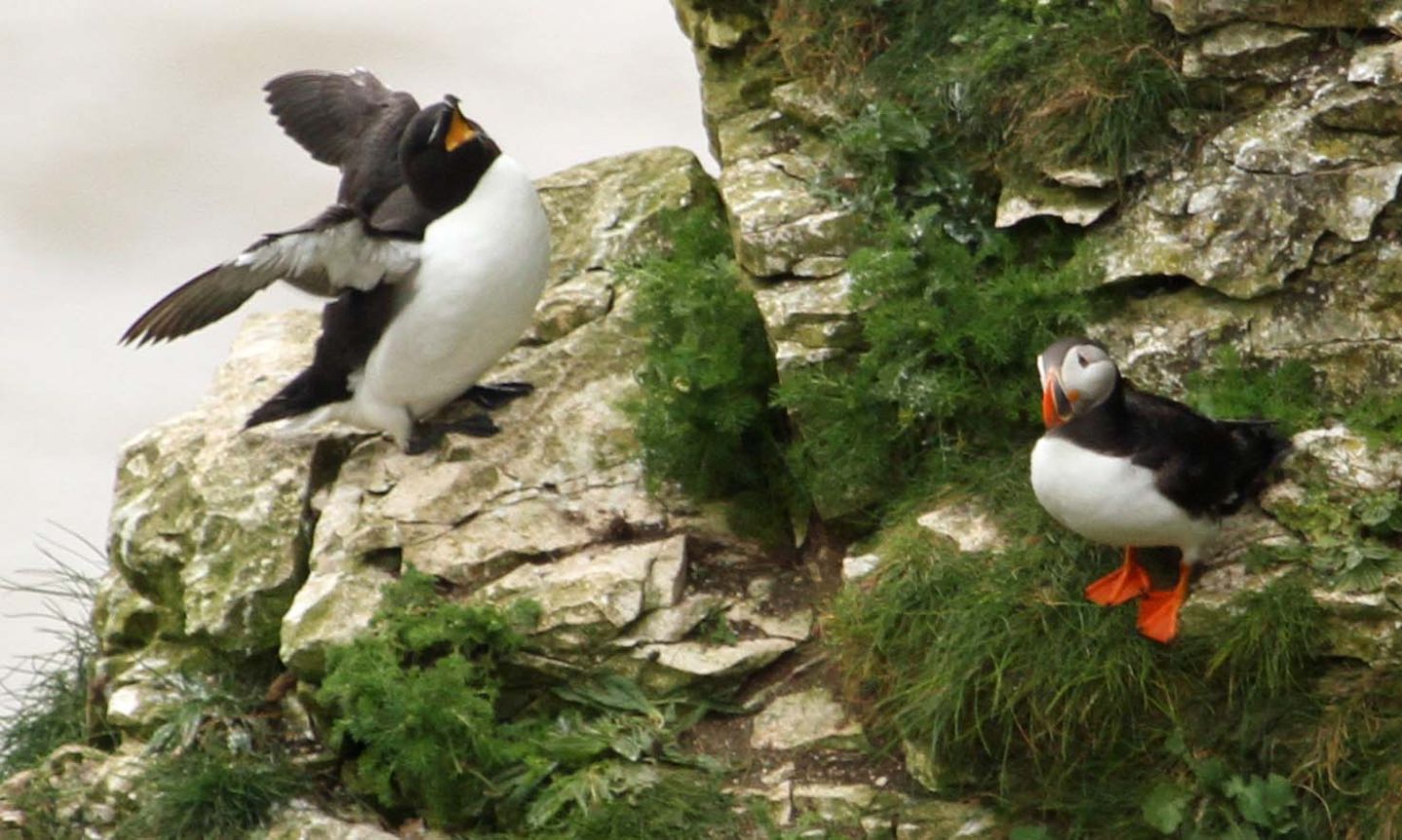 I always think that the Razorbills are the clean-freaks of the seabird world. They always look smart and dapper as they sit on the slimmest of ledges and appear quieter than other seabirds. On this particular day, their necks shimmered golden brown in the sun. Their razor beaks looked glossy and almost rubbery reminding me of the texture and colours on a Killer Whale. A sliver of yellow from the inside of the mouth when they do call (or yawn?!!) looks like they’ve raided the lemon bonbon jar! They are beautiful birds. I even saw one having a laugh at a Puffin! 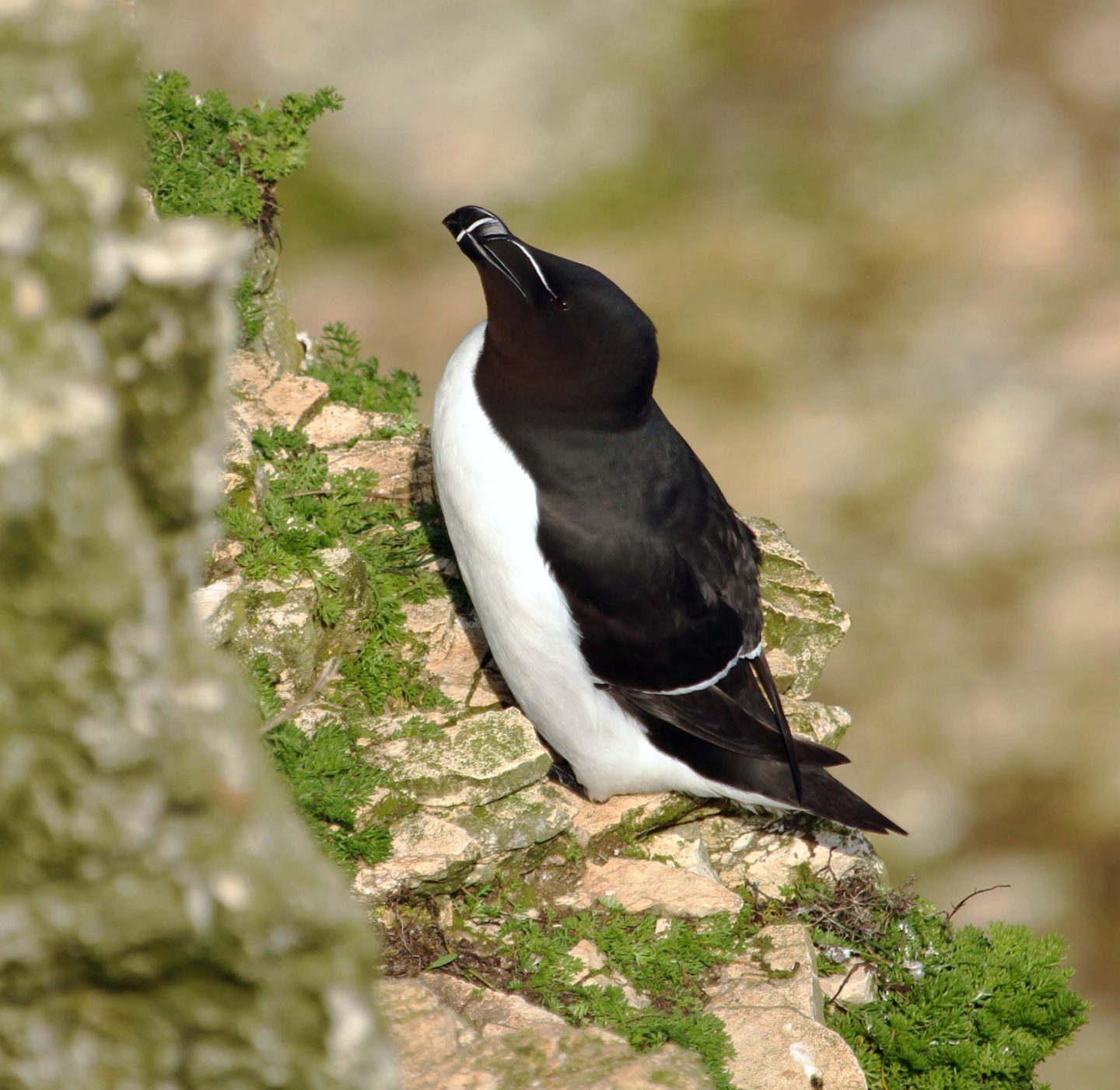 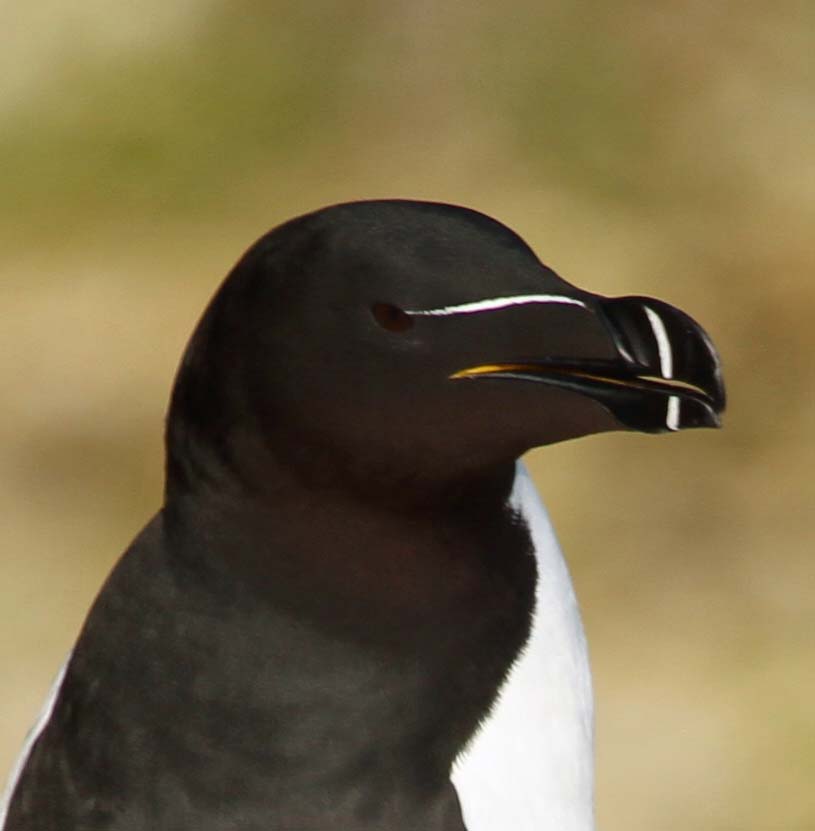 The Guillemots clinging to the cliffs didn’t seem to appreciate the wind. They buffered up, facing the cliff wall, noisy but looking fed up. Kittiwakes, more clean-freaks, sat on their ledges mixing in with the Guillemots, taking everything in their stride and just watching the world go by. Each cliff had a Puffin lurking somewhere. The RSPB should produce a ‘Where’s Wally?’ book called ‘Where’s puffin?’! 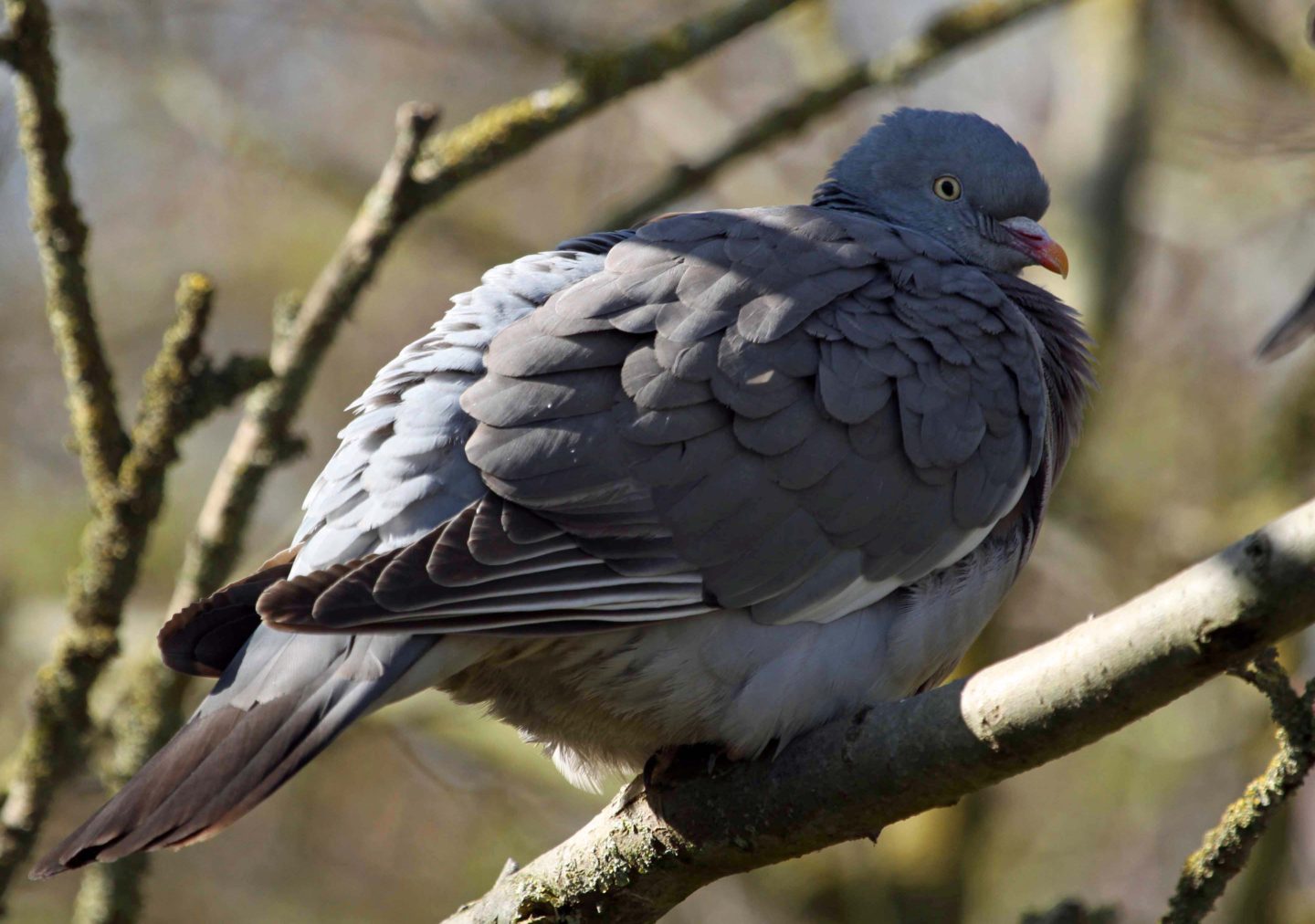 Leaving the main Gannet event behind at Staple Newk, finding some windless spots to watch from became the order of the day. That came in the form of the dell near the car parking areas. I love this spot. It’s calm, sheltered and quiet after the noise, hustle and bustle of the cliffs. On this windy day, it took a while for the ears to adjust. Here, Tree Sparrows were nest bulding, in and out of the bird boxes. A Robin and a Dunnock serenaded them as they did so. Two Woodpigeons huddled together in one of the trees staying out of the wind. The Jackdaws’ “jack, jack” mingled with the Crows’ far off “caw, caw.” Blackbirds and Chaffinches flew through and over the shrubs. A flock of Goldfinch flitted in and out of the shrubbery presumably taking a break from the birdfeeders nearby, making one heck of a racket, shouting shrilly at anyone walking by.

So, did I see my Short-eared Owls? Sadly, no. But, it wasn’t for want of trying. The wind must have put them off. Infuriatingly, photos of them popped up on social media sites the next day and over the weekend showing what a fabulous show they put on! How annoying! But, no worries, I saw some fabulous birds in very short space of time and it just means that I have an excuse to go back!

Sight of the day

My favourite sight of the day, in the far distance, was this disgruntled Jackdaw sitting on a sign showing the Gannet poster-boys and girls….. 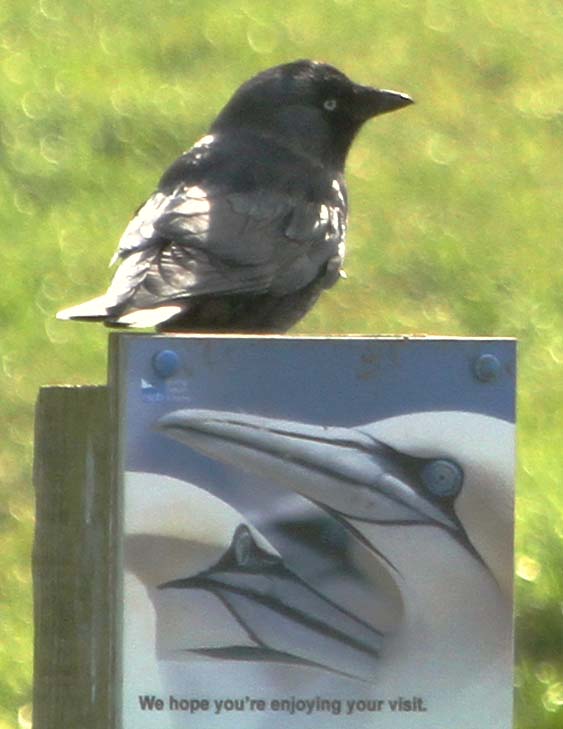 “…and don’t get me started on the Puffins!”