The grainy old gate doesn’t swing but judders to a stand still at a grassy clump only just inside the meadow. I squeeze through the gap, catching skin on nettle. As the heat of the sting tingles in the back of my hand, I feel ankle coolness as dew soaks through sock tops. Shoving the gate shut, I see the first moth. A micro moth. Tiny, but complex in pattern, it has an equally complex name, Celypha lacunana. It sits sedately on the same leaf whose sting is now swimming under my skin and looks smug as if it knows what the leaf did to me.

As I move through the meadow mix of tall, glistening grasses, buttercup pollen mixes with morning dampness and smears my calves with soft powdery streaks of pale yellow. The fresh wet smell is fading as the sun climbs.

A fresh, dark orange Large Skipper butterfly rests on the magnificent magenta flowers of betony. The colours of both betony and butterfly shouldn’t complement each other but they do, both being rich and exuberant. Two Small Skippers skip past my shoulder, rising then dropping, somersaulting onto another betony then tumbling onto a slender strip of grass. Ringlet butterflies lie low, open on the yellows of Bird’s Foot Trefoil whilst Meadow Browns prefer the mauves of Devil’s Bit Scabious.

Nearby, harebells tremble in the slightest of breezes, their pale, bluey hue almost transparent. They make me feel clumsy, heavy handed. I watch where I plant my feet but cannot fail to see pink frilly spikes of Common Spotted Orchid in the distance. Pignut, flouncing white, wispy sprays between the grasses and buttercups, is everywhere. I always thought that this delicate plant didn’t suit the name ‘pignut’. I was wrong. Pigs love the edible tuber, or nut, below the surface so now, it is, for me, perfectly named. I watch the butterflies bask on the flowers as bees whizz past me and swifts swoosh with a screech above me. A grasshopper clicks. 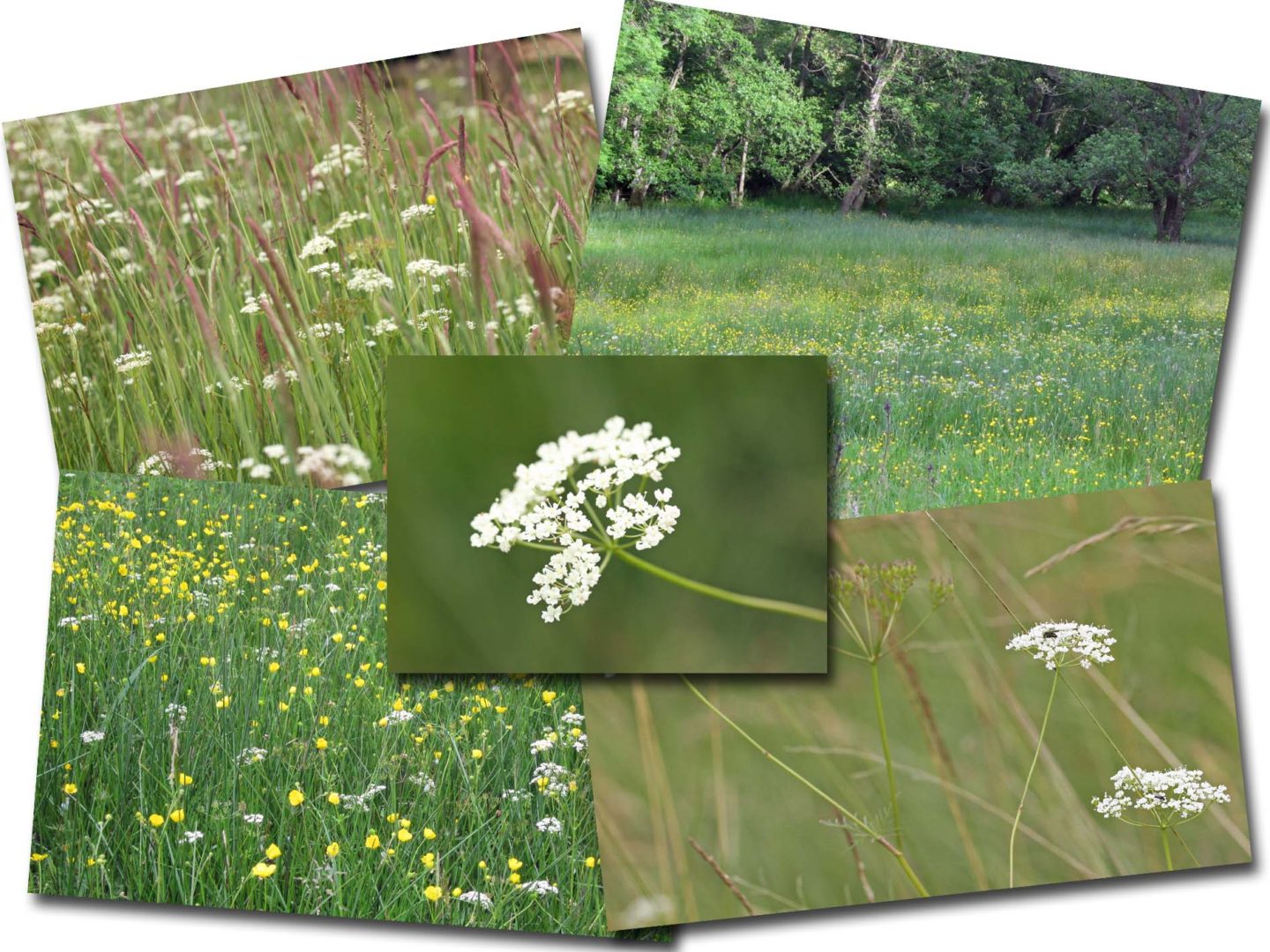 But I’m not here for any of these things, interesting or beautiful as they may be. I’m here for something specific. I’m still only steps from the gate and there it is or, rather, there they are.

Every year, same time, same place, irregular pinky-green tinged white spheres form a patch the size of a single bed sheet. White Clover. Not uncommon by any means, it’s a gardener’s nightmare or is it a guilty pleasure? But, here, in this meadow, it holds something special. Chimney Sweepers. Often living in colonies, the Chimney Sweeper moth loves the White Clover here and dangles from the flowers like a rock climber, clinging on with one finger, over a precipice. There are plenty of them today. They take turns fluttering off the flowers, flapping then floating before finding the next flower to do more dangling.

Having overwintered as eggs, Chimney Sweeper larvae rely on the surrounding Pignut as a foodplant but, having emerged as moths, they seem to prefer the White Clover. I’m thankful that they do. Unlike other day-flying moths, camouflaged to remain undiscovered in the undergrowth, Chimney Sweepers stand out against the white of the clover flowers. They’ve chosen the best backdrop to show off their deep black, sooty wings and, as if in a last minute backstage frenzy, they’ve hastily applied off-white mascara to the fringes on the tips of their forewings. From June through to August each year, they perform in the sunshine. Today is no different. I watch their show and inwardly applaud.

A few days after emerging, the deepness of the black degrades to a chalky dark brown, the pale tip almost disappearing. All are black, not in a brash, glossy 10 Downing Street sort of way but more in the way of a charming, understated charcoal drawing. Everything about this moth defines a look of blackness. The latter part of the scientific name Odezia atrata simply means ‘black’ whilst the meaning of the common name of ‘Chimney Sweeper’ needs, hopefully, no explanation.

Actual chimney sweeps are considered lucky. Think of Dick Van Dyke’s character ‘Bert’ in Mary Poppins singing ‘chim chiminey, chim chiminey, chim, chim cheroo, a sweep is as lucky, as lucky can be’. I’m certainly lucky to have so many Chimney Sweeper moths living right on my doorstep as they are not so common throughout the UK particularly in the south. If you want to see them, look out for Pignut, especially in unimproved grasslands and meadows. Without Pignut, they are highly unlikely to be present. Once you see Pignut, look for flowers like White Clover or Bird’s Foot Trefoil nearby. The moths also like a bit of dampness. Seivedale Fen, where I see them, is a mix of damp fen fed by springs and a much drier meadow area. Perfect habitat. Have a look at your local patch. Does anything fit the bill?

Meanwhile, I think my luck’s in so I’m off to do the Lottery.