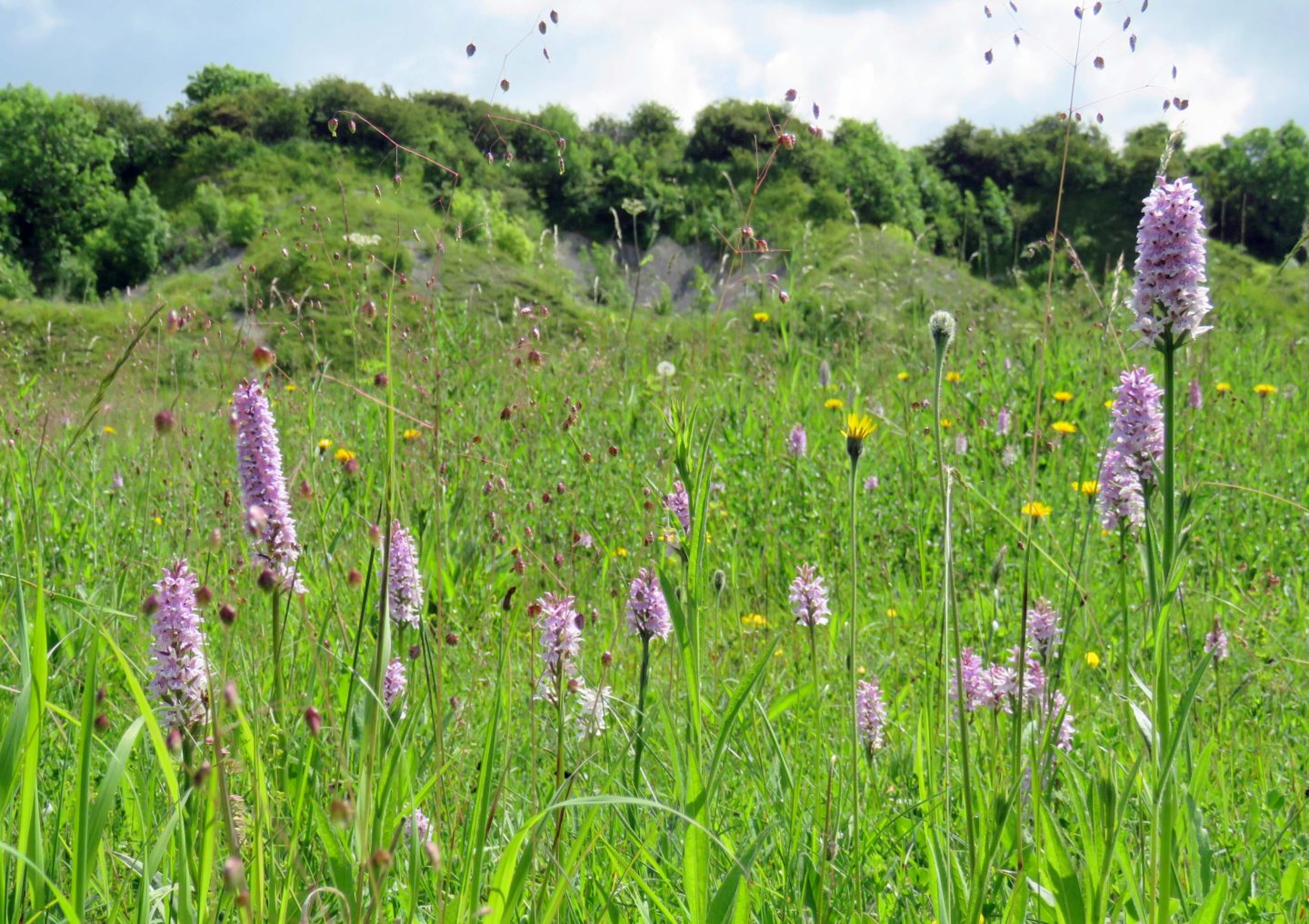 Last year, Yorkshire Coast Nature in collaboration with The Yorkshire Wildlife Trust ran a ‘Botany Day’ at Wharram Quarry for £45. Accompanying like-minded people and an actual botanist appealed to me so I paid my dues and gave it a try….

I’d been to Wharram Percy, the medieval village, before but had no idea about a quarry. I looked it up on The Yorkshire Wildlife Trust web site then, on a saturday in June, packed a map, waterproof (well it’s inevitable in Yorkshire, isn’t it?), a few sandwiches, flask of hot water and teabags (can’t possibly let tea stew in a flask!), notebook and a wild flower guide. The joining instructions sent to me by email were easy to follow and I was soon meeting up at the Wharram Percy car park with the said like-minded people, a botanist and a guide from Yorkshire Coast Nature.

The fields were filled with almost-ready mustard-yellow crops studded with bright red poppies. The views across these fields were fabulous showcasing the Wolds under a vast, bright sky. So far, it was a good day weather wise! We followed the narrow path flanked by these fields, introducing ourselves, occasionally stopping to discuss a plant or two. The pace…was…very…very…slow! Suited me!

After picking our way across a field full of old cowpats (yes, I took a great deal of care here as I really did not want to smell of poo for the whole day!), we crossed a stream via a wooden bridge in front of the entrance to the medieval village. We turned right and followed the course of the stream along a disused rail track, following it to a junction with a road where, there, on the right, was Wharram Quarry. Well, that was an easy walk! 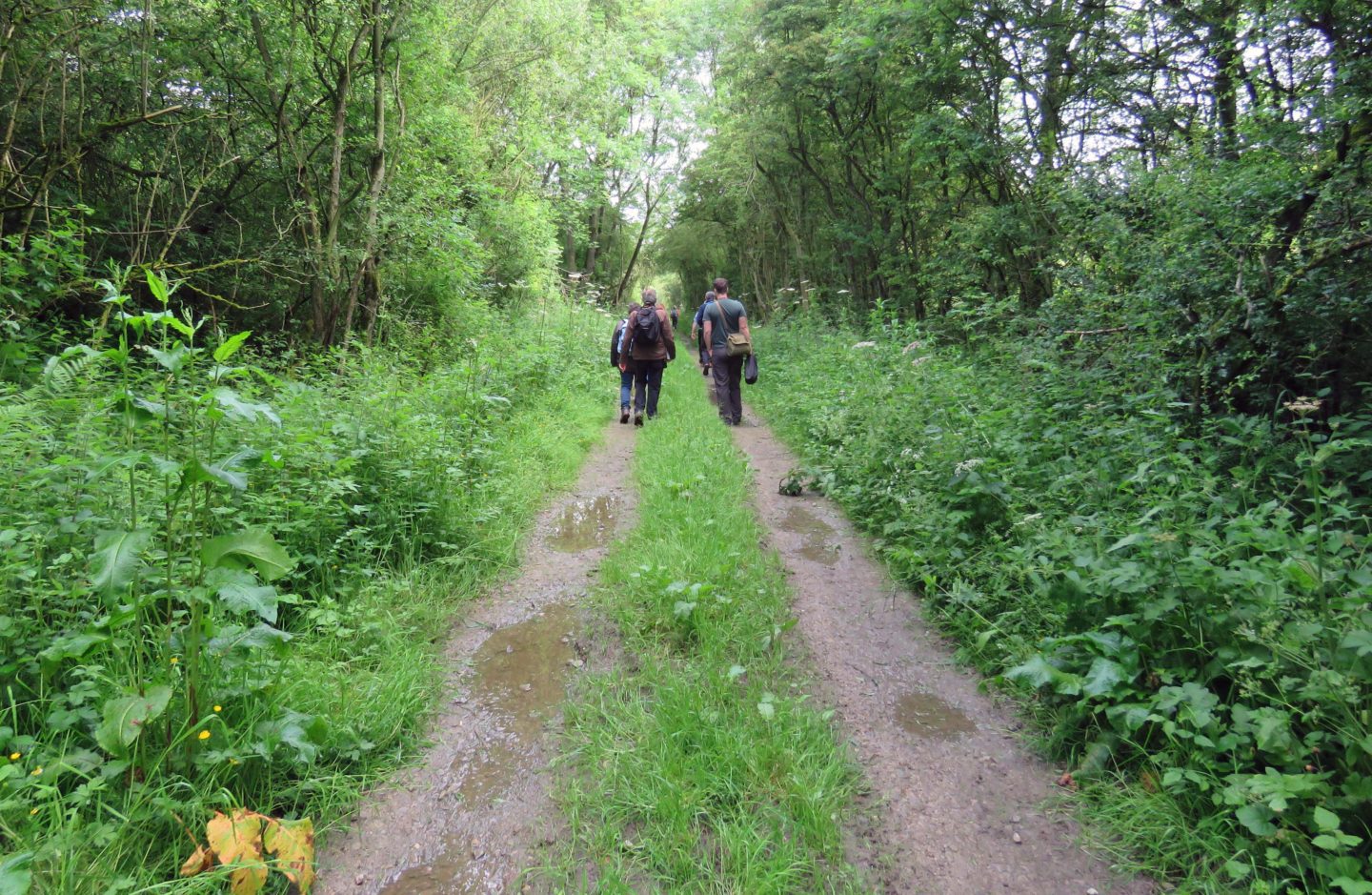 Through the gate, I scanned the quarry. So, what did I think? Initial thoughts were ‘Erm, what’s this?’, ‘I can’t see anything!’, ‘why am I here?’ and ‘a whole day here?’ I’m not sure what I expected but it looked bland and uninteresting. I could see a typical old quarry with small cliff edges and hummocks covered in grass and shrubs. It didn’t look promising.

Then, I looked down. A few inches away from my mud strewn boot was a Bee Orchid. A Bee Orchid? I’m always excited to see a Bee Orchid! My eyes focussed and I saw that it wasn’t just one solitary spike but loads of ’em, right by the entrance too. I took my initial thoughts back!

But, now I had a problem…where to put my feet. The ground was so full of stuff that I didn’t want to squish anything. I took it slowly and followed the botanist along a worn track to the right.

Before long, there was a plethora of Common Spotted Orchids….a Pyramidal Orchid, several of them…then Twayblades….then a Northern Marsh Orchid. Woo hoo! My orchid identification skills were coming along but, the best thing about this trip, was that there was a botanist on hand to ask questions. And ask questions I did, particularly about Marsh Orchids. Poor man!

As the sun began to warm the day, the butterflies made an appearance. Large White, Common Blue and a variety of Skippers kept flitting on and off Field Scabious, Wild Thyme, Bird’s Foot Trefoil, Red, White and Zigzag Clovers, Restharrow and Ragged Robin. Chimney Sweepers were common and a Silver Ground Carpet moth made an appearance.

Clustered Bellflower. I’ve never seen one before and I was assured that this particular example was unlikely to be a garden escape. Being a bit of a rarity in these parts, I felt very privileged to see it.

I found a small plant which I couldn’t even hazard a guess at identifying. Botanist to the rescue. This tiny plant was Germander speedwell. This was a plant that I am familiar with and should be able to identify with ease so what on earth…? It appeared that this particular specimen had a ‘gall’. A gall midge called Jaapiella veronicae lays eggs on plants and has a particular liking for Germander speedwell. It causes a growth that, in turn, thickens leaves and deforms the plant. Ok, I didn’t expect that answer!

The Yorkshire Wildlife Trust says on the Wharram Quarry website ‘ …the quarry is one of the few Wolds sites for thistle broomrape which parasitizes woolly thistle’. They were right. There it was. And what a spectacular plant it turned out to be.

Looking very like an orchid, but chunkier and on the ‘on the way out’ side of things, this spike of thistle boomrape sat alone but proud and stately. But it wasn’t it’s stature that I admired, it was the details…the purple veined corolla, the lack of chlorohyll in its stem making it a yellowy purple colour, the yellow and white hairs all over and above all, it’s fondness for Yorkshire. In fact it appears to only like Yorkshire…can’t argue with that!

My picnic lunch was a noisy affair. The sound of bees buzzing all around us was quite hypnotic. We then had freedom to thoroughly explore the quarry, ask questions, socialise or just sit and soak it all in accompanied all the while by chiffchaffs, warblers and distant buzzards mewing. Lovely.

Eventually, we retraced our steps back up to the car park where the clouds were brewing and within 5 minutes of being back in the car, it began pouring down with rain. How lucky was that! Result!

For me, yes it was. Having an expert botanist on hand meant that I could confirm my existing knowledge as well as ask questions that had been festering for some time. I now feel confident in returning to Wharram Quarry with my new found knowledge. I will go back this summer and definitely recommend a trip. You don’t have to do the walk, there is very limited parking right outside the quarry gate. What I do recommend though, is visiting on a day in late spring when it’s nice and sunny. The weather brought the very best out of the quarry the day I was there. Enjoy!